Had such a good start to the day today , I opened my emails and saw the 6th email this week saying ‘congratulations’ . I haven’t said in recent blogs but we’ve been getting photos done for Logan to get him into child modelling and acting. 6 agencies have accepted him and he had 1 rejection. But the one that accepted him today is the one I was hoping for the most! I’m so excited , I know I’m biased but my son is adorable and his eyes are going to get him places (This agency were shocked how beautiful his eyes are and that he’s so alert and aware for a young age!)

Nothing fun were planned to happen today just food shopping which I absolutely hate.The weather has been beautiful though (finally) so we decided to make the most of it.

First stop was Spoons for some food where as always Logan got lots of attention as usual , then off we went for a walk along the sea front with some fresh donuts.

It felt like we were being tourists for the day ! Out all the years I’ve lived here I’ve never been to the end of the pier. My mum gave me a bit of a history lesson on the sculpture pictured above of the woman knitting a fisherman’s gansey.

Susan’s fact of the day; Gansey’s are made to keep fishermen warm and dry, each area has a different pattern so in case of accidents they’re easily identified.

Eventually we came to do the boring bits and bobs (food shopping dragssss) Logan thought he’d make his presence known in Iceland , being very vocal. My boys definitely found his voice. He seemed to enjoy food shopping and the attention he brought to himself. He thought he do the exact same on the bus on the way home. 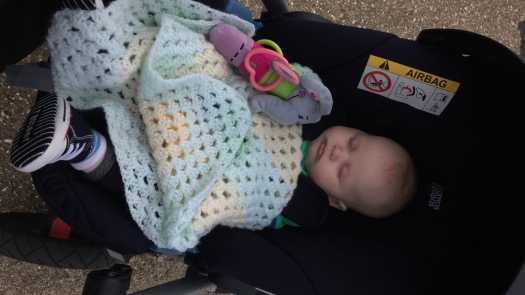 sea air knocked him out

We got home and had a bit of play time and tested Logan with some bubbles , he really didn’t seem that interested in them at all.

Now it’s time for us both to get as much rest as we can as it’s Logan’s third lot of injections tomorrow (absolutely dreading it!)